My friend Ben loves the English dessert Jaffa Cake, which you can’t really get here in the States. It’s a sponge cake with orange jelly and chocolate coating. Jelly is a bit outside of my skill set but I decided to do orange curd instead. I make lemon curd rather frequently but I might even like the orange curd more. Chocolate shavings completed the illusion.

zest of one orange

END_OF_DOCUMENT_TOKEN_TO_BE_REPLACED

This recipe is not an ice cream at all, but it is a smooth cool dessert. It’s also made predominantly with raw eggs, so if that makes you nervous, definitely skip it. Consuming raw eggs can be a health risk.

My friend Shane, who formerly eschewed dairy and other non-paleo foods, loved this dessert because it was one of the rare sweets I made that she would eat. You can leave the cinnamon out, but I think it makes it even more interesting. Serve alongside some whipped cream if you like.

END_OF_DOCUMENT_TOKEN_TO_BE_REPLACED

It has been a long hiatus for reasons somewhat boring to mention, but suffice to stay that the ice cream creation and consumption will continue — although in another state, as I’m now in Ann Arbor. While the winters are worse in Michigan than in California, the heat of the summers makes ice cream a particularly necessary treat. Or so I tell myself.

In this season when everyone is eating frozen things, I figured a flavor that almost everyone can enjoy was a good place to start. I mean, you’re not going to serve pesto ice cream to a child, are you? In honor of a particular small human who lives in Oakland and was the only Californian nice enough to record a goodbye video for me, find the below flavor — which almost no one, young or old, will be able to resist.

END_OF_DOCUMENT_TOKEN_TO_BE_REPLACED

Habeas Custard doesn’t believe in political parties (don’t get me started on nationalism, either), but today is the New Hampshire primary and, interestingly, ice cream has become part of the race — at least on the Democratic side. Ben Cohen, one of the founder’s of Ben and Jerry’s ice cream, has begun a fundraiser for Bernie Sanders based on income inequality. It’s a version of mint chocolate chip ice cream in which the chocolate is in the form of a disc at the top of a pint, and the mint ice cream is at the bottom. In a metaphor for the 1% and the rest of us, you have to break up the chocolate 1% disc and mix it into the rest of the ice cream.

Another Ben (also known as BNR), a friend of HC, contacted me about this and I responded with a version of “Well, anyone can do that.” It’s not very difficult. Moreover I don’t believe in gimmicks (beyond the gimmick of naming your ice cream blog after a legal term and then never discussing the law despite being a lawyer) — and this reeked of gimmickry. Plus, it’s basically crème brûlée but with hard chocolate, and then mixing it up? Please. That’s more trouble than it’s worth, and messy, as seen in the video. I’m not a Coldstone Creamery. 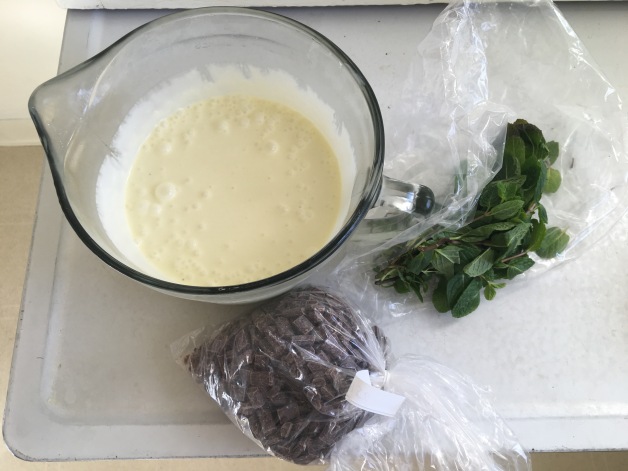 All you need: base, chocolate, and mint.